Welcome to the MineHQ Wiki!
The ultimate source of information of all things related to MineHQ!
We currently have 37 articles and 2 active users. 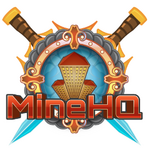 The MineHQ network, owned by FrozenOrb Interactive, is a collection of different connected Minecraft servers that includes unique features within the popular framework of PvP, in which its original server, KitPvP, was launched in the summer of 2012 by [???]. The latest MineHQ server released is MCTeams Elite.

The constituent games of MineHQ accommodate PvP game-modes that stimulate competition, in which examples include free-for-all, 1v1, teaming, and a multitude of others. Most of these game-modes revolve around the quick consumption of mushroom stew, also commonly referred to as "mushroom soup," a feature commonly and popularly instituted to many servers incorporating PvP combat that heals 3.5 hearts.

KitPvP is a MineHQ server that utilizes the use of collections of primary items consistent with the game-mode of PvP, or kits, hence its name. With the employment of kits and mushroom stew, an item that instantly heals hearts when consumed, various produced game-modes exhaust the player's skill, enhance competition, and provide constant gameplay. Released in the summer of 2012 by [???], KitPvP has received [???] updates, in which multiple updated and introduced features are assessed by community players on the MineHQ Forum.

MCTeams, also known as MCTeams Main, is a MineHQ server that proposes players to survive in a generated Minecraft map with an anarchist system of society in vague intent of gaining, managing, storing, and protecting wealth and valuable resources collected from the map. In execution of this, various features are created by instinctual behavior of players, including raiding and the engagement in PvP through game-modes of free-for-all, 1v1, and, commonly seen, teaming. Other features offered by the server itself include tracking, salvaging, warps, and more. Released on August 15, 2013, MCTeams has received [???] updates, increasing with every corresponding new Minecraft version.

MCTeams Elite is a MineHQ server that is a spin-off version of MineHQ's MCTeams Main, differentiating in features that create more difficulty in resolution of gaining, managing, storing, and protecting wealth and valuable resources. This distinction includes the lack of enchantments of weaponry items to eliminate increases in item tier levels and potions to exclude beneficial additional buffs that may help in combat. Along with this, the map size is reduced. MCTeams Elite was released on December 27, 2013 [???] and has been updated [???] occasions, accreting every Minecraft version.

Features
Retrieved from "https://minehq.fandom.com/wiki/MineHQ_Wiki?oldid=4591"
Community content is available under CC-BY-SA unless otherwise noted.